Where are they now?

If you are an alumni or former teacher, please update us with contact info and tell us where you are now so we can share!

After two years teaching English abroad in Yamagata Japan, Eva accepted a place at NCCU School of Law with a full ride. She will graduate in the spring of '22 with a focus on public defense and interest in protester rights after the events during the summer of 2020. She plans to practice in the Columbus Ohio area, in between hiking adventures and lazy mornings with her two cats and partner.  She graduated from Guildford college in 2016 with a double major in Peace and Conflict Studies and Spanish Language and Literature

Layman serves in the United States Air Force in a cyber career field. He is currently attached to AFTAC, at Patrick Space Force Base, whose mission is to monitor nuclear treaty compliance. He is celebrating his 20th wedding anniversary in 2021. He has passed on what he learned at Camelot to his children, inspiring them always to ask about what they don't understand and to be fearless in their quests for knowledge. As a result, his two oldest children graduated from JD Clements Early College High School in the spring of 2017 and attend their first choice colleges - NCCU and UNC-G. His daughter graduated with a BA in Psychology, and his son with a BA in Philosophy. The youngest daughter is completing her senior year in High School, maintaining A/B Honor Roll for the entirety of her High School career. She has been accepted to both Elon College, and NC State University. She is currently deciding where to attend for her aspiration of a BS in Chemistry. 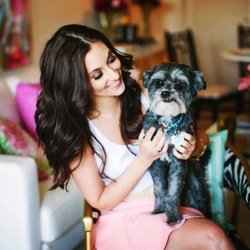 Christie worked in banking for approximately 8 years, and left the industry in the summer of 2014 to create a colorful Home Decor & Entertaining Accessories brand with younger sister, Mary.  She is currently serving as Creative Director and Head of Product Development for The Blush Label (www.theblushlabel.com). The line has been featured in Garden & Gun, Home Fashion Forecast, Joss & Main, New York Live, and The Today Show. They currently exhibit at High Point Market & Atlanta's International Gift & Home Furnishings Market. 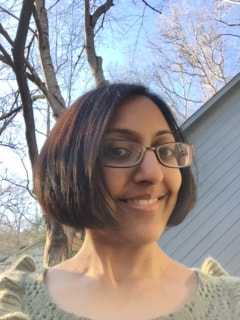 Serena currently works at Doctors Making Housecalls doing data entry, specifically on the doctor of record report for different teams.  Previously Serena  worked as a Senior Office Administrator at Max Psychiatry.  She earned her Bachelor's Degree in Human Services with a minor in Psychology in 2009.  She enjoys watching college football games, especially the Alabama Crimson Tide, as well as the Carolina Panthers, and traveling overseas and within the United States.  She loved playing ping pong and taking Spanish while she was at Camelot, and especially enjoyed Immersion Day.

Michael is a Mechanic at S&D Coffee  in Concord, NC.   He is married and the proud father of two:  Zachary Robert Murray, 20, Trinity Suzanne Murray, 13.

Josh earned a B.A. in Communication Studies with a concentration in Media Studies and Technology from UNC – Chapel Hil in 2017.  While participating in UNC’s Hollywood Media Internship program, he was offered a job and is now a Junior Editor with Revry, a global digital media network for LGBTQ content in Los Angeles.

Stephanie lives in Holly Springs and currently teach special ed preschool with Wake County Public Schools in Cary. When  not teaching, she loves traveling with her family and snuggling with her 3 fluffy Shih Tzus.   About Camelot, Stephanie says:
"Camelot was my home away from home. I’m sure I drove some of my teachers crazy, but I knew that I was loved. I enjoyed our trips to play and swim at Duke Park and the fact that I was able to learn at my own pace. I try to incorporate some of the same teaching strategies that were used at CA with the students in my own classroom. " 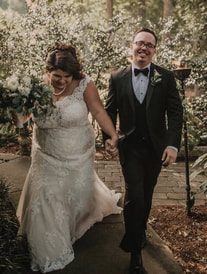 Alec got married to Alexandra Clayton-Porter on July 7, 2018, and travelled to New York City, London and Dublin on his honeymoon.  After graduating from Camelot, he earned a Bachelor’s degree from NC State University, majoring in Education in General Studies.

Fiona traveled to India the summer before her senior year at Elon for a cultural exchange program. She graduated  in May 2019 and finished an MA in School Counseling in 2021.

Olivia graduated from Elon University and is working as an advocate for victims of domestic violence as a Legal Service Coordinator in Alamance County.

After earning a B.A. in history from Campbell University, Thomas worked as an historian with the City of Raleigh. He then returned to school, attending the Law Enforcement Executive Management Program and is now a full time Corporal with the Bailey Police Department in Bailey, NC and serves as a Reserve Sergeant with another law enforcement agency.

Luke returned to his Durham roots to study Medical Physics at Duke University.  He graduated from the University of Illinois at ​Urbana-Champaign with a degree in Mathematics and Computer Science in 2018.

Joyce tutors math K-12 for individual, private clients with unusual learning needs in her home.  She specializes in supplementing school curriculum and preparing students for EOGs.  When not tutoring, she is traveling to world historic sites.  Recently she saw the pyramids of Egypt, cruised the Nile, hiked in Petra, Jordan, floated in the Dead Sea, and viewed Cherry Blossoms in Japan during the historical Platinum Week of the New Emperor taking office.

Grace graduated from NC State in 2018 and was accepted to Brown, UNC-Chapel Hill and Duke for graduate school.  She returned to her Durham roots to attend Duke to earn a Masters in biostatistics. ​

AJ worked as a catering manager at Greek Fiesta and is now figuring out how to be a good father,  programming video games, making sweet funky music with Brian Powell and another friend, and being in love with the most real women ever. He says "Life is a rollercoaster, but life is good."

Brian chosen a new career path and enrolled at Durham Tech to earn an Associates Degree in Engineering, and then transferred to NC State to get a B.A. in Mechanical Engineering.  He also works as a full-time manager at Café Carolina and Bakery in Meadowmont.

Aaron served 12 years as a military officer in the North Carolina and Pennsylvania National Guard with one tour in Iraq.  He received a bronze star, meritorious service medal and 3 army achievement medals.  He is currently the owner and CEO of Sphere Brakes, LLC, commercializing a patented new brake system for several industries.  He has a Bachelors Degree from East Carolina University and a Masters from Penn State.   He and his wife, Mandy, welcomed a new baby, Noah, in July, 2015.

Richard attends UNC - Chapel Hill.  He was selected as the graphic designer from the UNC E-Sports Club, as well as the Secretary of the Tar Heel Rifle and Pistol Club.

Tad has been working for Goodwill for 12 years, originally as a Store Manager and then promoted to District Manager after 5 years.  He and his wife Tami have a son, Sean, and a daughter Hayley, who attends East Carolina University.

Rebecca ​received her bachelor's degree from Wellesley, and her MD from UNC Chapel Hill, and is currently a psychiatrist for Carolina Medical Center in Charlotte.

Brian is a Certified Hacker Forensic Investigator and Security Specialist.  He is working as a cyber-security resource in Little Rock, Arkansas.  He has completed coursework to become a Certified Ethical Hacker and a Certified Hacker Forensic Investigator.  His hobbies include kayaking, fishing, and camping with his wife.    His advice to students is to find what they have a passion for, and, as Robert Frost commented take "the one less travelled by."

Michael is back at Camelot, teaching and serving as the International Student Coordinator and Athletic Director. 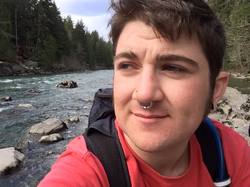 After graduating from Camelot in 2005, Isaiah received his BA in Psychology from Mount Holyoke College in South Hadley, MA. After college he earned his Masters in Social Work from NYU.  He worked as a child and family therapist in Boston doing home based therapy for three years and then ventured out to the Pacific Northwest and landed in Portland, OR.  He continues to work in community mental health as a child and family therapist and is in private practice part time.  He spends his spare time hiking, cycling, skiing, publishing creative writing, eating vegan food, and hanging out with his dog! 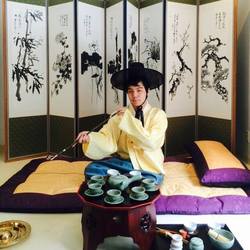 In is attending American University in Washington DC earning a double major in International Business and Finance and minoring in Mandarin Chinese.  He went to Tianjin, China for a year to study Mandarin.  I he also working at the Korean Embassy Economic Sector in DC.  He has done many things like working with the CBP for Korea, US FTA, and many other embassies.  He misses playing soccer and basketball and Camelot and all his teachers!

Dedra is the Operations Manager at Duke's Fuqua School of Business.  She lives in Durham with her two children, Donovan and Dorian.

Aaron is a Film Technician working on Unsolved Mysteries and other television shows.  He works for various studios - Universal, Disney, Warner Brothers, and Nickelodeon.  He works as a Best Boy Electric as well as the Gaffer and is currently working on the show A Dog's Blog.  He lives in Long Beach, CA with his wife, Brooke.  They have three children.

Leslie is an Artist and Business Owner of Sunset Jewels.  After Camelot, she attended Louisburg College and received her CNA certification at Thomas Healthcare Institute in Raleigh, NC.  She is currently attending Alamance Community College studying Early Childhood Education.  She lives in Burlington with her husband Jason and two children - Gabriel and Trinity.

Jamie is at home with her five children, working part time at her husband's law firm as a bookkeeper.  She also started a business names Jonquild where she makes jewelry that she sells in boutiques and galleries.  She remembers interviewing at Camelot Academy on a Sunday and starting work the following Friday (going on her honeymoon in between!).

Philippe lives in Durham with his wife and two young children.  One of his memories of Camelot is that he was the fastest teacher expelled from the teachers against the students basketball team.  He had 6 fouls in 12 minutes! 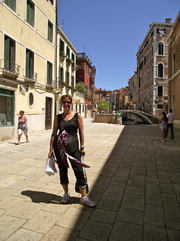 Since leaving Camelot, Sarah got married to an active duty Army officer and moved to five different states and two different countries.  They have three beautiful daughters.    Kylie is graduated from high school and is attending the University of South Carolina.  The twins, Mary Ellen and Jayne, are in high school.  Sarah took a while off from work while the kids were young, but returned to teaching full-time six years ago.  Sarah has great memories of working at Camelot, co-planning with staff, and helping students make connections among various subject matters.  She also has memories of trips to Asheville, Charleston, Mexico City and Quebec!

Ellen lives in Jacksonville, NC with her three children - Caleb, Spencer, and Brayden.  She works as a model.

Andy is the producer of a big video game that came out in August, 2013 - it's called Lost Planet Three and is sold by Capcom for most of the major gaming devices.

Asia lives in Durham with her two children.

Crysta works at Murdoch Developmental Center as a Physical Therapy Supervisor and as a PRN therapist at Granville Medical Center.  She also works at a church nursery on Sundays.  She lives in Hillsborough with her two children.

Leah is an attorney in Durham.  She earned a BS in Community & Justice Studies and Psychology in 2004 from Guilford College, and a JD in 2009 from North Carolina Central University School of Law.

Joanna is a Lab Technician at a lab in Research Triangle Park.

Mary is NICU Nurse in Raleigh, NC where she lives with her husband Jason and her two children, Drew and Molly.

Lian graduated from UNC-Charlotte in 2005 and is now a restauranteur in Charlotte.  She has a baby named Peyton Avery Karsten.

Melanie lives in Cary with her husband Nate and her son Zane.  She works as an Emergency Nurse at Rex Hospital.